In one night Etta Spencer lost everything she’s ever known and loved. She’s been pulled back in time to 1776 in the middle of a battle. Etta has not only traveled miles but also years from her home.

With the arrival of this strange passenger on his ship, Nicholas Carter is now confronted with something from his past that he hasn’t been able to escape and the powerful Ironwood’s, who won’t let him go without a fight. The Ironwoods are looking for an object of power, one they think only Etta can find.

Now, Etta and Nicholas must set of on a dangerous journey across centuries and continents, following clues left in a letter. As they closer to the hidden object and the truth behind why the Ironwoods are so desperate to get their hands on it other forces threaten to separate Etta from Nicholas and her way back home, forever.

I received a copy of Passenger from HarperCollins New Zealand to review. This has been on my TBR for months so I was really excited to have the chance to review a copy.

I’ve only read one other book with time travel and I loved that. I think the reason I enjoy 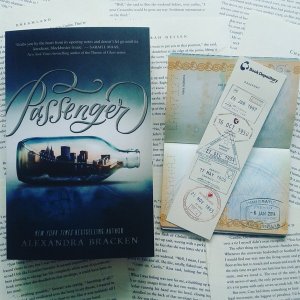 books with time travel is because I can enjoy more than one ‘time’ in the one story. I don’t have a problem reading books set in the same place and time but reading about someone travelling through different events and times is really enjoyable. I might have to find more time travelling books.

Passenger is told in both Etta and Nicholas’s perspectives. I really liked Etta. I did get
annoyed that she didn’t say what she was thinking sometimes, especially to Cyrus Ironwood. She’s smart, independent and strong. Etta was faced with the fact that a huge part of her family’s history has been kept from her. Instead of getting angry she’s determined to get this object and save her future from the Ironwoods.

Nicholas annoyed me. I think part of it was because he used violence to get what he wanted. I don’t like the kinds of people who use their fists to settle things. There was something else about him but it’s hard to put into words. The way he’d think about Etta, like she was property to be owned was something that really annoyed me. I don’t know if it was because of the time he came from but it really drove me crazy.

I’ve never read a book by Alexandra Bracken before. I have seen her other books online but haven’t gotten around to reading them. Maybe one day.

Aside from Nicholas I really enjoyed Passenger. I would have given it five stars but I couldn’t because of Nicholas. Also, some parts did drag for me. There was a lot descriptions about what Etta was wearing and I’m not really into the small details but I get why they were included. But overall I loved it. There was a little cliffhanger at the end and I’m really looking forward to finding out what happened to Etta in the next book.

Have you read Passenger? Leave me a comment and let me know what you thought.

Last week I started reading One Last Stop but took a break over the weekend while I watched a few movies before work.
My last book mail from a couple of days ago is this gorgeous edition of The Sing of Achilles.
When Book Depository had a sale last month? Earlier this month? I can't even remember. But in that sale or whatever it was I bought so many books.
After finishing Allegiant yesterday I read the Captain America: Winter Soldier graphic novel.
I got some book mail yesterday. I did have a copy of this from the library but it had to go back before I had a chance to read it.
So far today I've read a few chapters of Allegiant and kind of arranged my new bookcase.